The Good Old Daze of the Pokemon Trading Card Game

The year was 1999. I was a super-charged, hyper-consuming twelve-year-old kid, looking to unregretfully dive head-first into any heavily pushed childhood craze. Following the Beanie Baby crash of '98, it was only a matter of time before I would fall prey to a peculiarly named video game trend from Japan.

Pokemon was first met with skepticism, but once I learned to let go, I really let go. I was watching, recording, and re-watching episodes of the anime. I was spittin' pokeraps to phat beatz like WHAT. I was crafting bad 90s websites replete with background MIDIs, scrolling marqees, and animated GIFs. Surprisingly, the one thing I wasn't doing was playing the video game itself. I mowed lawns like a fiend to save up for a Game Boy color and the Pokemon Blue Version. Once I bought it, nothing else mattered. I remember pouring an ungodly number of hours just mindlessly leveling my team in Viridian Forest, which drew laughter from my friends. In my mind, they just lacked the determination of a true Pokemon Master. Life with Pokemon was good. Little did I know, I had yet to discover the most tantalizing outlet for my Poke-debauchery- the Pokemon Trading Card Game (TCG).

I remember opening my first booster pack. The fresh smell of cards, the dynamic colors, the suspense. **deep inhale** **slow exhale** Each pack had 11 cards: 2 energy cards, 5 commons, 3 uncommons, and 1 rare. My rare was a foil Alakazaam - my head nearly exploded. Sky cracked a foil Raichu, and his brother Wyatt cracked a foil Venusaur. My brother would eventually pull a foil Charizard. I couldn't wait to collect them all and master each of them.

Over the next few months, I accumulated more cards through booster packs, theme decks, and trading. I traded a Tangela and a Bulbasaur (2 commons) for Wyatt's duplicate copy of a rare foil Venusaur, but it was worth it for him because he couldn't use his Venusaur without my Bulbasaur. Hopefully, he forgives me, and we'll both chalk it up to life-lessons-learned. FACT: Everything that you need to know about life can be learned through the Pokemon TCG.

On a fateful trip to Mankato, I discovered a games and hobby store that held Pokemon card tournaments. "Finally," I thought, "a way to prove my mastery." I couldn't wait to compete. In the beginning, I couldn't afford the good cards so I never made it too far in a tournament. I used powerful commons and uncommons like Kadabra and Dewgong as well as a playset of Energy Removal, but it could only get me so far. I looked to the Internet to find a new edge.

I was a net-decker even before that honorable credential had a name. Scott Gerhardt was editor at pojo.com, the main source for Pokemon TCG strategy at the time, and came out with a number of "killer decks": Potpourri, "Viagra", and The Sponge. I net-decked the 3-color Potpourri deck and handily went undefeated at a local tournament. Early on, it was clear that all Pokemon cards were not created equally.

The longer I played, the more trainers ended up in my deck. By the end of my illustrious career, my decks consisted of approximately 35 trainers (out of the allowed 60 cards), skimping dangerously low on basics and energy. Back then, evolving pokemon was too much of a liability so I stuck to basic Pokemon and cast trainers with reckless abandon. My goal with these trainer-heavy decks was to have the option to obtain any card from my deck on any turn of the game (and, consequently, draw my entire deck on any of those turns). Those early years really were the wild west. Bill (literal 2-for-1), Professor Oak (literal draw 7), Computer Search (tutor), and Item Finder (Regrowth) were my base, and ridiculous cards like Plus Power, Energy Removal and Super Energy Removal did the rest. A single Lass would have blanked my entire deck, but alas, to us kids, that card was nothing more than a bad rare (like Devolution Spray) that every kid prayed would pass over his booster pack. 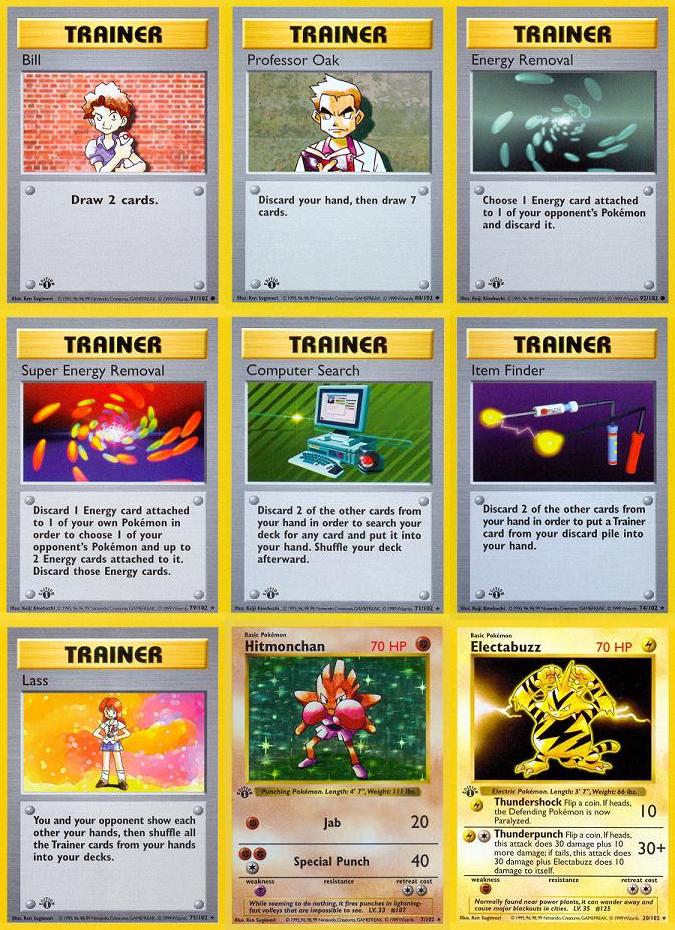 I remember one match in particular against someone sporting a "Raindance" deck. Raindance's Achille's heal was its reliance on weak basics like Squirtle and Magikarp in a world of Hitmonchans and Electabuzzes. This made Plus Powers and ways to find them especially awesome. He started with a lone Squirtle to my Electabuzz and luckily won the coin flip to start the game. Even more luckily, his Squirtle paralyzed my Electabuzz with his Bubble. That would usually portend a second turn Pokemon Breeder into Blastoise, who would one hit KO my Electabuzz with Hydro Pump. Instead, on my first turn, I proceeded to Bill, Oak, Item Finder, and Computer Search until I had assembled a Lightning energy, 2 Plus Power, and the coup-de-grace- my singleton Full Heal to remove the paralysis. My opponent was stunned. Nice game, brah.

Miser's Full Heal for the Win

Another one of my fonder (albeit degenerate) memories stems from a deck called Rocket's Trap. The goal was to cast Imposter Oak's Revenge to reduce the opponent's hand to 4 cards, then cast Rocket's Sneak Attack to reduce it to 3, and, finally, hit them with The Rocket's Trap to reduce the hand to zero cards. This left them top decking on turn 1 and you likely with a hand double the size of your deck. There was one catch, Team Rocket's trap required you to win a coin flip, but you could still play with 4 copies plus Item Finders to better your odds.

Armed with my likely 35+ trainer Rocket's Trap deck, I handily made it to the finals of that tournament. On the first turn against my finals opponent, I reduced his hand to 3 cards but failed to destroy the rest of his hand by flipping three tails in a row (12.5% chance mind you). Coin flips are one of the more dreadful aspects of this game, especially considering that the tauntingly ill-conceived "Chansey" coin flipped heads approximately 87% of the time. (I didn't use that coin nor did I let my opponents use it.) At any rate, he Lassed my hand away, evolved into Dark Vileplume which disables all trainers, and my grossly unassisted Movie Promo Mewtwos were left fighting his psychic resistant Snorlaxes while I drew blank after blank after blank.

Since Nintendo took over the game from Wizards of the Coast, I understand that cards have become a bit more balanced, and some of the flaws have been patched with rules changes. For example, the player that starts a game cannot cast any trainer cards. I think never reprinting Professor Oak, Energy Removal, or Super Energy Removal helped keep things in check, as well. I believe Bill actually got reprinted as a "Support" card which is a special type of trainer that can only be played once per turn.

I played Pokemon through Gym Heroes (circa July 2000) before beginning my transition from trainer to magician- my transition to a real man's TCG - Magic: the Gathering. I remember winning my first Magic tournament with Blastoderms and rebels. Disappointment followed protest as my fellow magicians saw me put my store credit towards a Rocket's Scyther.

From then on, I played magic exclusively. Fast forward to my senior year in college, a combination of being overworked and overstressed led me to regress back to my former, hyper-consuming twelve-year-old self. I fired back up the Pokemon Trading Card Game for Game Boy and started winning auctions on ebay to rebuild my decks. It was at that time that I had a bright idea. Since 90% of Pokemon cards were unplayable in tournaments, bringing the concept of drafting (which I had learned from Magic) to Pokemon would breathe a revitalizing new life into those misfit 90%. I bought a booster box of Base Set 1 off of eBay. 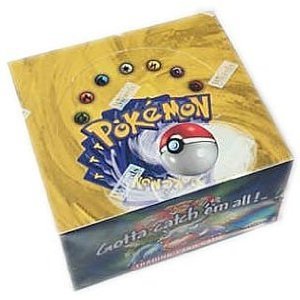 Booster box of Base Set

Unfortunately, I never got around to assembling the 6 required Pokemon trainers to partake. Instead, it is now likely destined to permanent residence within my personal time capsule.

Scans courtesy of http://pkmncards.com, a website that is very well put together