The American people are awakening from a slumber- their political apathy exhausted by an incessant stream of misdirection, lies, and failure. While the homefront is on the verge of bankruptcy, the battlefront is booming. When it comes to war (death and destruction), "insufficient funds" is oxymoronic. Fortunately, the light at the end of the tunnel is fast approaching and a critical mass of enlightnment will soon be reached. To the orchestrators, that means one thing - accelerating the agenda.

We instictively knew all bets were off for a second term, and they're not wasting any time. Its all-in claim that Bashar Al-Assad indiscriminately unleashed chemical weapons upon his own people is sloppy and desperate. It simply doesn't add up. Why would Syria commit such an act knowing that America has been chomping at the bit for years, looking for any excuse to strike. It would be FAR more logical that it was carried out by the battle-weary "rebels" (with CIA assistance, no doubt) to gain American military support. But it isn't about logic, it's about emotion. Politicians are preying on the common misconception (mind control) that our reality is nothing more than a television drama. And when it comes to TV, you can only sit back and watch the drama unfold. 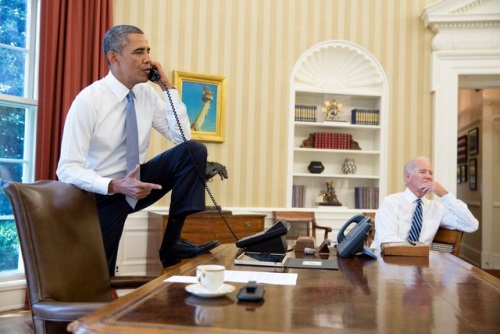 The President does not have power under the Constitution to unilaterally authorize a military attack in a situation that does not involve stopping an actual or imminent threat to the nation.-Obama (the unelected version)

The hubris of this administration is unparalleled. Its hypocrisy is that of legend. How arrogant the assumption that it knows how to deal with Syria's problems better than the Syrian people. How pretentious the claim that they can distinguish the "good guys" from the "bad guys." How insane the thought that overthrowing a foreign power by arming Islamic extremists would make this country more secure. Not so long ago, the same thing happened in Afghanistan when the US assisted a "freedom fighter" known as Osama Bin Laden. History truly does repeat itself.

Without hard evidence, the American public is deeply skeptical (if not outright opposed). They have seen this script play out before with Iraq. The strength of their collective memory has been underestimated. The lies are now transparent; the rhetoric is now empty. Not even Obama (and the cult of his person) can sell this one. Public support is so low, it's going to take another 9/11 style event to put the people back in the trance. Beware of false-flags.